Get into the holiday spirit with this second chance romance from Jennifer Snow! Maybe This Kiss looks like it could be the perfect Christmas read!

— SYNOPSIS —
Love is always worth the risk…

Neil Healy was happy to be promoted to Air Force Lieutenant, but he’s less than thrilled that the new job has brought him back to his hometown. The memories alone could kill a man, to say nothing of actually seeing the woman he never got over. Neil knew avoiding Becky Westmore would be impossible, but he didn’t expect the chemistry between them to be as strong as ever.

All Becky wants this holiday season is to get through the month of December with her sanity intact. Not helping? Her ex-boyfriend’s return to Glenwood Falls. Even after a decade apart, Neil still makes her feel in ways no other man has. But Christmas is a time for miracles, and maybe Becky’s will be a second chance at first love.

The unexpected sound of a deep male voice made Becky jump and lose her balance once again on the wet floor. Two hands gripped her shoulders to steady her and she immediately wished he’d have let her fall. Feeling her cheeks on fire, she turned to face Neil.

His profile picture did not fully capture the hotness standing in front of her. Time had been far too good to him. The young, boyish face had been replaced by a rugged handsomeness that would turn more than one head in the small town, and she immediately felt a pang of irrational jealousy. His solid, square jaw with just the right amount of stubble had always been her weakness, and his dark brown eyes held a look of uncertainty mixed with a friendly familiarity as though no time at all had passed since she’d last gazed into them.

Becky folded her arms across her body, putting up a physical barrier to match the internal one that had immediately sprung up around her heart at the unexpected feelings spurred by the sight of her ex. “What are you doing here? How’d you get in?” Small town or not, she never left her door unlocked. After having a police officer for a husband, she’d known not to adopt a false sense of security.

“Your daughter let me in.” He surveyed the mess of the laundry room. “Washing machine problems?” he asked, removing his jacket to reveal a tight, black T-shirt haphazardly tucked into one side of a hip-hugging pair of denim.

“Oh no…it’s no…” She clamped her lips together. She couldn’t even remember the question. What was it about his big, muscular arms that turned her brain to complete mush?

Maybe the fact that she still remembered what it felt like to be wrapped up in them?

“Let me look,” Neil said, moving her away by her shoulders and stepping carefully into the two inches of water on the floor. It sloshed under his boots and soaked the frayed hem of his faded jeans.

Riding boots. He’d always talked about owning a motorcycle. An adrenaline junkie from an early age, he’d owned his first dirt bike at fourteen and the sight of him on it had done crazy things to her teenage hormones. She remembered sneaking out after curfew to ride on the back of it, holding on tight to him as they sped along the empty dirt roads at night, stopping to make out near the riverbank…“That’s not necessary. I got it under control.”

He ignored her. Opening the lid, he looked inside, then reached into the water, up to his biceps. Sexy, toned, still-tanned-from-the-Miami-sun biceps.

“Really, I’m sure you have places to be. I’ll call someone if it’s something I can’t fix on my own.” Since ending his pursuit of a hockey career, Jackson flipped houses for a living and was quite the handyman. He was her go-to for these kind of things.

“It’s okay. I’m here anyway,” Neil said, not sounding all too pleased about it.

Well neither was she. She certainly hadn’t been expecting a visit from the hottest man to ever leave her weak in the knees. And she definitely would not have invited him in and allowed him to see her messy laundry room. But here he was. Standing in two inches of water, his arm disappearing in her washing machine, looking like a sexy gift from handyman heaven.

And she was wearing Star Wars pajama pants and a holiday-themed sweatshirt featuring Grumpy Cat that said dashing through the snow…get the f*ck out of my way.

Not exactly the way one fantasizes about running into an ex.

She was going to have to have the “don’t open the door to strangers” talk with Taylor again.

“I think I found the problem,” he said, pulling a thin piece of black, lacy fabric from the machine. “These were wrapped around the agitator.” He opened the thong, stretching the thin waistband between his hands. “Nice.”

Her mortification obviously knew no bounds. She yanked them out of his hands and tucked the wet fabric under her arm. She’d worn them under duress earlier that week when she’d had nothing else clean. They were horrible. The lace, the string between her ass cheeks…She shuddered at the memory of how they’d ridden up past her jeans when she’d bent over at the grocery store to pick up an apple that had rolled off the fruit display table, and she’d caught the fifteen-year-old stock boy, Al, staring.

She should have burned them instead of washing them because she would never wear them again. “Thank you for discovering the problem,” she said through clenched teeth. “Even though I said I had it under control.”

He ignored her comment. “Why don’t you plug it back in and see if that fixes things?”

Well, another thong wouldn’t be caught in there, if that’s what he was hoping. A memory of the lingerie she used to wear for him flashed in her mind—matching bra and panty sets, one-piece teddies…The look in his eyes seeing her in those things had made her feel like the sexiest woman in the world. And the way he’d slowly remove the garments from her body had sparked a passion, an intensity, an undeniable need…

Her eyes met his now and she could see her own thoughts reflected in his expression. He glanced away quickly, but it was too late—she knew that look well. She wasn’t the only one struggling with the past.

She plugged in the machine and it hummed as it resumed its cycle as though nothing had happened. As if the ground beneath her feet hadn’t just trembled.

“Suddenly a connoisseur of women’s delicates?” Damn, that sounded jealous even to her ears.

“Twelve years is enough time for anyone to change.”

Was it? Then why did things feel so much the same when she looked at him? Too much time had passed, too much life had happened for both of them—she couldn’t claim to know the man he was now. Yet, her heart insisted it did.

Before she could say anything, his hands were on her face. Her eyes widened at the feel of the rough palms against her skin. She opened her mouth to speak, but his lips pressed against hers before she could process what was happening.

What was he doing? What was she doing? That was the better question as her arms circled his neck. And how did the sensation of his mouth on hers feel so damn familiar after all these years? 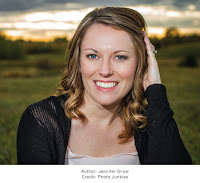 Jennifer Snow lives in Edmonton, Alberta with her husband and son. She writes sweet and sexy contemporary romance stories set everywhere from small towns to big cities. After stating in her high school yearbook bio that she wanted to be an author, she set off on the winding, twisting road to make her dream a reality. She is a member of RWA, the Writers’ Guild of Alberta, the Canadian Authors Association, and the Film and Visual Arts Association in Edmonton. She has published over ten novels and novellas with many more on the way.
WEBSITE | TWITTER | FACEBOOK